On Saturday I ran my fourth half marathon.  The past few weeks of training have reminded me of some things that seem to apply to life as well.

Point three was key this past weekend and it’s what God and I have been talking about ever since. 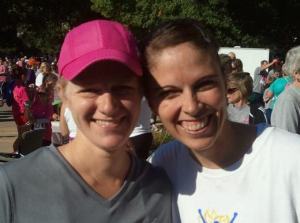 My wonderful friend and running buddy Nikki and I trained hard through a lot of different challenges and prepared our bodies to not only run this race but meet a personal time goal.  We went to bed early on Friday night and did our best to sleep well, but already my mind was fighting against fear and nerves.

I’ve run this particular course three times now. I know the parts that I struggle with, that have been hard in the past and my mind that night before the race was telling me that it was going to be harder than ever because not only did I want to finish, I wanted to finish fast. (Well, fast for me.  Not fast for the Kenyans.) 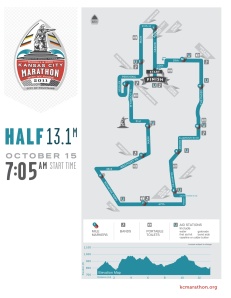 (look at that elevation profile – not flat!)

We got up Saturday morning and started the race strong.  We made it up the hill I had been dreading and I was still feeling good.  And then a second steeper – but shorter – hill that I had apparently blocked out in my mind came right on the heels of the big hill and I struggled all the way up it.  My body was able to do the work, but my mind was weak.

By mile four I was ready to cry and had to walk shortly after.  Poor Nikki tried so so so hard to keep me motivated and dragged me along for five more miles before we got separated by the crowd.

God and I talked a lot that last 4.1 miles.  I knew He had helped me prepare for that day and I gave up.  I didn’t claim the victory He had given me and I don’t think missing a goal in a race is a sin, but not walking in faith and obedience is and that’s what had happened.  I chose failure that day because I chose fear.  I was afraid that even if I worked hard I wouldn’t meet my goal.  I was afraid of working hard and still letting myself/Nikki/those who came to watch down.  I was afraid of hills and fatigue and an uneasy stomach.  I was afraid I couldn’t conquer that race and so I chose not to be carried by the One who had already given me the victory.

And all too often, that’s how we deal with life.  We are afraid so we refuse to walk in faith.  What if God doesn’t provide?  What if there isn’t enough?  What if He doesn’t do what He said He would?  What if I misunderstood? What if?  What if?  What if???  But God has already given us the victory through Christ Jesus His Son.  That doesn’t mean that we won’t struggle and that He won’t allow hard things to draw us closer and teach us more and cause us to lean harder on Him.  He calls the weak and the broken and the ill-equipped.  We will need Him more and more.  But He calls us to walk in faith, to walk in the victory He has given.  And to give all the glory to Him, because only He is worthy.

By His grace I will run another race.  (At the time of this writing I’m still so stiff I can’t run at all, but that should heal soon enough.)  And by His grace I will meet that time goal.  But even if I don’t, that’s really not the point.  The point is to work hard, train hard, and trust Him for the results and the courage to finish well.