In case you haven’t ever picked up on it, we love to travel.  We love to see different places and enjoy the change of pace that comes with a get away, be it long or short.  The girls have been begging us to take them to the beach (they speak their mother’s language).  Matt and I lobbied hard for Lost Valley, because as much as I love the beach, Lost Valley is the most magical place on earth when it comes to vacationing as a family.  But, the beach won out.  So we looked into road tripping it to Florida and the beautiful beaches we heard about there but we (Matt) just couldn’t get our (his) head around the idea of driving 17 hours each way.  So, we looked at other options. 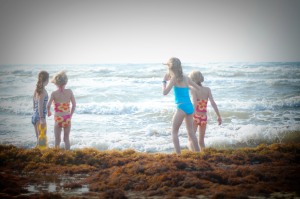 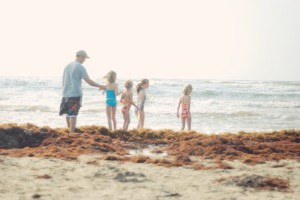 Throughout and right after high school, Matt was involved in a home schooling ministry that resulted in him having wonderful friends all around the country (and the world, in some cases) and a whole slew of those friends live along I35 in Texas.  So, after consulting some of these friends and Google Maps, we decided a Texas Tour, complete with a stop at the beach in Port Aransas, was in order.  Little did we know the “excitement” that lay ahead of us.  😉

*photo disclaimer – I did a horrible job taking pictures of the people we visited on this trip and I’m really annoyed at myself for that.  So, all these friends I’m going to mention over the next few days….not a single picture.  😦  I do have some great ones of the girls, though, so enjoy!

We left our home early two Saturday’s ago (i.e. 1:30 a.m.).  We loaded up a truck full of sleeping babes and headed south.  We stopped near Dallas, Texas, to see our sweet friends Justin and Melissa.  We enjoyed coffee and visiting with them, seeing their sweet new baby girl.  It was so great to visit and catch up, even if only briefly.

After Dallas, we headed on down to Austin.  Grace managed to get car sick between Dallas and Austin.  I rummaged through my purse and found the benadryl and we were up and running again. (Our family doctor said once that benadryl is good for nausea.  I question whether it actually affects the nausea or if it just makes you so darn tired you don’t notice how sick you feel.)

In Austin, friends Drew and Jessica put us up for the night.  We enjoyed catching up with them and loved having dinner with them and more friends (Brian and Peggy and family).  Mother’s day was slow waking up, coffee, very yummy breakfast tacos (in Kansas we would call them breakfast burritos – but they were tacos all throughout Texas), and getting back on the road.  Oh, but not before duct taping our car top luggage carrier back together and saying a quick prayer that our suitcases all stayed securely on top of the vehicle. 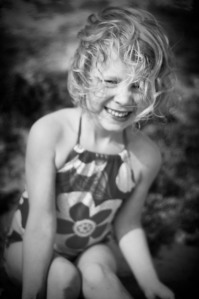 After Austin, we embarked on what seemed a very long drive to Port Aransas.  I think we had meant to take the interstate as far as possible, but the GPS took us down state roads through little towns.  It was scenic, but we all just really wanted to be out of the car and on the beach.  The highlight was taking the ferry across the waterways to Port A.  This was quite a thrill, as I was the only one of us who had ever done that before. 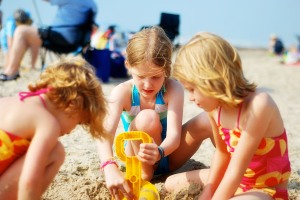 We stayed at Port Royal and were thrilled with our accommodations.  Two bedrooms, full kitchen, balcony overlooking the gulf.  We seriously considered staying another night, until Monday happened (I’ll get to that).  The wind on the beach was rather brutal, but the sand was wonderful and it was just fabulous to be near the ocean, soaking up warm sun and moist air.  The hotel also had a great pool, so when we wearied of the wind we headed over there.

Sunday night we (of course) were craving Mexican food.  (Because, let’s be honest, if we are what we eat, our whole family needs green cards.)  The parking spots at the resort were a little unusual.  These are privately-owned vacation homes and each parking slot was designed so that up to three vehicles could park in a line, one behind the other.  Since most of the parking garage was empty, there weren’t very many slots filled three-deep, so Matt just assumed they were deep enough for two cars.  Each bay of three slots was partitioned off with concrete columns.  Matt carefully counted back enough columns for two parking spaces, slowly began to turn to go out of the garage, when we suddenly heard a horrible crunch. 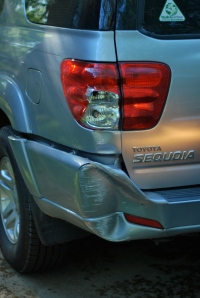 So, let’s pause a moment and begin a running talley of misadventures, forty-eight hours into our trip:

All right then.  Moving on.

We gathered our discouragement and headed on out to dinner, counting the right number of columns this time.  Matt had heard good things about a restaurant there on the island and we went in search of it only to find it was closed for Mother’s Day.  All right.  Moving on.  We found another mexican place with a pseudo patio and had a rather subdued dinner, trying to make the best of things.  Really.

Monday morning we woke up, eager to hit the beach and enjoy a day in the sun.  Matt and I were still seriously discussing the possibility of booking another night as this place was just so wonderful and relaxing.  By that night, however, our tune would change dramatically. 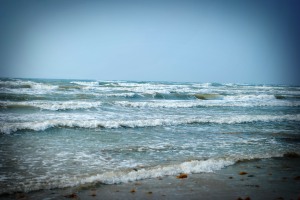 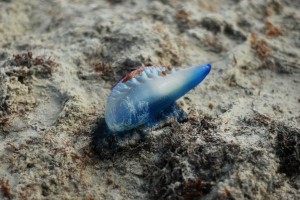 We thoroughly enjoyed our day in the sun, going in only to eat lunch.  We played on the beach until a couple of the girls and I had had all the wind we could take then we headed over to the pool.  Later in the day, we headed back out to the beach for a while longer.  I promptly fell asleep on the sand and Matt entertained all the girls.  By the time I woke up, Emma and Ellie were officially DONE, so we headed back to the room.

I knew when I woke up that I didn’t feel great.  I was hot and felt somewhat dehydrated.  I assumed the girls felt the same.  I took them back to the room and had them take showers.  As our skin cooled from the heat and our eyes adjusted from the sun, I began to see that they were all pretty sun burned. 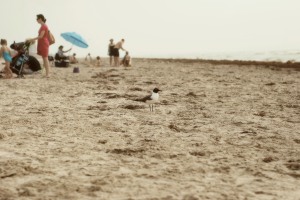 We headed out to dinner, trying that elusive mexican restaurant again.  They’re closed on Monday’s.  😛  So we tried yet another mexican place.  Halfway through dinner Matt was horribly chilled and nauseous and we were all exhausted.  We stopped by the local IGA and picked up some aloe vera gel (with lidocaine!) and I slathered everyone in that, dosed them up on tylenol, and we vegged out watching Extreme Makeover Home Edition reruns on CMT. 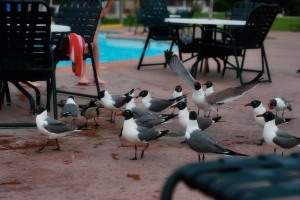 Tuesday morning everyone woke up feeling utterly miserable.  I’ll be honest, I’ve not seen sun burns that bad.  Ever.  We did apply sunblock, but apparently spray-on sunblock doesn’t adhere well when you apply it in 20 mph winds.  Matt and I both felt horrible, not because of our own burns (mine were pretty mild really), but because of how the girls now felt.  It was clear we would not want another day at the beach, so we packed up and headed out as quickly as all our aching bodies would move.

So that we don’t lose track, let’s recap our events once again:

Honestly, we were all feeling pretty darn discouraged by this time.  Vacation was not turning out at all like we had planned.  Matt stopped us all, we prayed.  We gave thanks for the good times we were having and for the discouragements we had faced so far.  We asked the Lord to be with the rest of the trip.  And then we headed out, carefully counting the columns lining the parking spaces.

Tomorrow: San Antonio and our (mis)adventures near Sea World.

One thought on “Texas Tour, Part I”